Once a year the city of Zurich gets transformed into a little hotspot for international filmmakers and actors. The Zurich Film Festival (ZFF) takes place this year from September 25th to October 5th, for the tenth time, also a reason to celebrate with a special Programme.

The opening night was the most crowded one, with photographers pushing each other to the side, to get the best picture of the star guests, Swiss celebrities and the founders of the festival: Karl Spoerri, Nadja Schildknecht.

These autumn days are pretty warm for a city like Zurich: most days were mild and sunny, perfect also in the evenings to show a wardrobe without wearing any coat or scarf. Our carpet here is green and not red, and it gets crowded almost every night with fans trying to take a selfie with their beloved idols.

One of the most acclaimed stars in the past days was Spanish shooting star Antonio Banderas, which was promoting his latest movie “Autómata”, directed by Gabe Ibáñez.
The sci-fi-film was co-produced by Banderas, on a mini-budget, and it took a couple of years to get it done. According to the Malaga born superstar, they were using different requisites of past movies, like those from “Expendables 3”, to hold the budget.
Set in 2044, “Autómata” shows our world pretty dusky and desolate, with machines and robots taking control. Clear message to humanity: if we keep on going like this, it might end pretty bad. It should make us think more about our social media and gadget consumption. As I could hear from the interview, Antonio Banderas is still trying to get how an Ipad works from his daughter. And he’s not pretty interested in modern technology gadgets Another thing that makes this actor unique is how is able to manage personal questions. It was pretty clear that one should have been coming, since his ex-wife, Melanie Griffith, is playing a little role in the film.

“She was, is and will always be a great actress. This movie was the definitive conclusion of a 20-years relationship” – Antonio Banderas, Zurich 2014

I think there’s nothing else to say on that.

He showed up on the green carpet wearing classic black, and wasn’t rushing to get into the theatre. He posed for the photographers and had some long conversations with the reporters. His fans were obviously overwhelmed, and the Spanish flags couldn’t miss.
Antonio Banderas’ showing up at the Zurich Film Festival was exactly how I imagined it: the Spanish heat himself, down to earth, serious and laid back attitude. 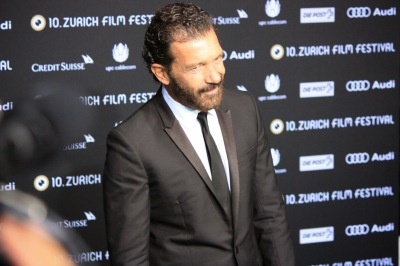 After Antonio’s appearence, it was the time of a Hollywood legend: the one and only Diane Keaton, The romantic comedy star honoured our little city last night, to get, as the first female in 10 editions, the Golden Icon Award (and she was so proud of it!).

She was delightly in a very good mood, posing with fans and running around on the carpet like a little sweet hurricane. Mrs, Keaton was rocking a pair of black Louboutins, a leather pencil skirt, completing the style with her legendary masculine touch: a gentleman’s hat. She always had the faible to set trends without being afraid, and last night she prooved that she still isn’t! I was a big fan, but now I am one of the biggest groupies, I guess… 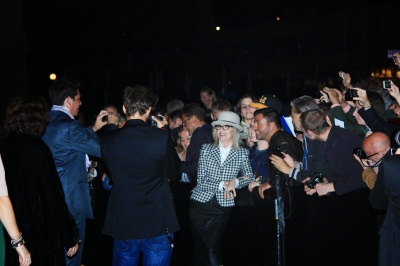 She didn’t stop smiling and joking inside at the award ceremony, the whole theatre was laughing at every sentence. Having a singing role in her latest movie “And So It Goes”, she took advantage of the situation and also sang for the audience. The film is a romantic comedy, with co-star Michael Douglas, who’s playing an egoistic estate agent, that doesen’t really care about the people he’s surrounded by. This changes after his son shows up with his granddaughter, and he meets the widow Leah, which hasn’t dropped her dream of singing despite her advanced age.
I have to say, it’s not my favourite DK comedy, there are plenty of better ones, but watching her acting is one of the best thing of the film.

Before Diane Keaton received the Golden Icon Award, there was a screening with her best movie scenes, including the “Godfather” trilogy, that helped her to get a golden globe status. Two words: well deserved!