Red painted walls, smoke coming from the stage, a huge chandelier at the entrance, round tables that aren’t for table dancing anymore: that’s the location where I had the pleasure to attend the show of one of the most outstanding bands of the British Music scene. I’m talking about Jungle, modern soul collective from London, already acclaimed this summer at several Festivals around the globe.

Jungle’s concert took place yesterday at Komplex Klub in Zurich, former Dollhouse Stripclub, a club venue that kept the original interior and the vibe of being somewhere tabooed. Lush! I love this kind of places! The show was a total sold out, and you could easily notice that by seeing people still standing in the queue outside when the guys where playing already. 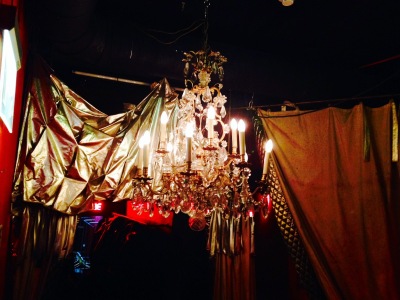 The concert was opened with “Platoon”, a track that made Jungle famous worldwide last year, a wonderful choice to break the ice. There were fingers snapping, people dancing, no place was more appropiate to have all those different kinds of mirror balls everywhere: the 70s were back within seconds. I’m not kidding: the best confirmation for my statement were a couple of ladies and gents, being in an age and looking like they really were present during the hippie happenings almost 45 years ago. So if they were dancing, then it means the show was good.
Jungle have oldschool Disco and Soul running through their veins, that’s for sure, but what it’s making them unique are the modern and psychedelic beats added in each song. You can think about Daft Punk, can hear some MGMT out of it, or even feel Jackson 5 out of it, but you’ll admit at the very end that’s nothing exactly comparable to Jungle’s sound. If I had to give to this wonderful collective’s music a Definition, I’d say modern Soul with a touch of Disco. Period.

Frontmen Tom McFarland and Josh Lloyd-Watson, on stage with their band (“composed of friends and friends of friends”), proved to have a great control of their voices live and sounded amazingly good. They could have might interacted more with the audience, but I belong to those persons who thinks that as long an artist’s performance is done right, I’d forgive them not talking. Could be the nerves, or as a human being, could be a bad day as well.
After warming up the already overheated club with songs from their only and current album like “The Heat”, “Julia” or “Accelerate”, the final explosion of emotions, the coronation of an evening catapulted a world I thought I missed out, was given by closing track “Busy Earnin'” and the encore with  “Time”.

Jungle were booked as opening act for Pharrell Williams after releasing their debut album. You could imagine why: Josh and Tom’s voices are a delight, their singing is very similar to Pharrell’s, but, unfortunately for him, they are way better live. These band is on the right way to shine. I can’t wait to see them play again! And what do we learn? Yeah, vintage inspired music will never die, because it’s still the strongest one to touch People, brings generations together and it’s timeless. We got the proof yesterday night.

If you missed Jungle live in Zurich yesterday, you have the Chance to experience them tonight at Les Docks in Lausanne. Get your ticket here

Rest of the world, grab your Dates here! There are Shows planned for Europe, US and Australia until March 2015

A Special thank you to Mainland Music for having me.

One thought on “Jungle (UK): the rise of Modern Soul”