I am a big fan of Montreux. If you are in Switzerland during summertime you absolutely can’t miss this place. It’s the riviera of our little country, where the lake gets a deep turquoise colour and you feel vacation vibes from everywhere. And you can’t obviously miss the legendary Montreux Jazz Festival!

I came here for the very first time back in 2009. I travelled pretty rarely to the French part of Switzerland, since my French is quite bad and I wasn’t feeling, uhm, let’s say not very comfortable with that. Well, this changed when I was strolling along the lakeside and feeling the vibe that the Montreux Jazz Festival gives, year after year. It’s amazing how this event attracts such an international crowd every year and how majestic it is. Come on: the huge lake, the imperial Montreux Palace, the funky restaurants – you HAVE to love this! 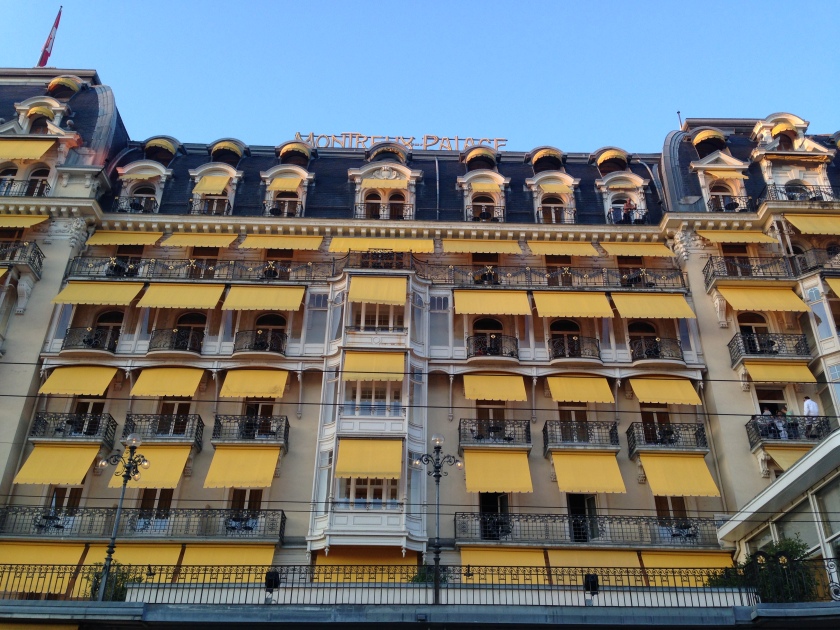 The festival itself isn’t really something new, it’s as legendary as it’s founder Claude Nobs, who made this event an institution since 1967 by having over the most influencial artists like David Bowie, Ella Fitzgerald or Deep Purple. In fact, Deep Purple’s famous song “Smoke on the Water” was written after an incident happened in Montreux, where a whole concert hall was almost set on fire and had to be evacuated. Or David Bowie, who played a complete album as an encore back in 2002. The Montreux Jazz Festival attracted magic moments that made history, and that’s unique on the Swiss festival terrain.

A pretty normal evening at the festival: foodstands and loads of music lovers – Photo:Montreux Jazz Festival

Music in the Park

This little place is all about music: you can literally see it, smell it and hear it everywhere. Starting from the free shows at the Jazz Lab or Music in the Park, going on to the big names at the Auditorium Stravinski. Another thing I love about the festival is that new talents have the chance to present themselves to the audience. In my opinion, it’s one of the best music events in Switzerland, in terms of line up and organisation. I fell in love the first time I stepped out of the train and I leave everytime with a delighted heart.

The Studio: the nightly meet up point & DJ mecca

If you’ve never heard about the Alabama Shakes you should totally check their work out on whatever music platform you are on (Note: I am still one of those few persons who likes to pay for the artwork called music – you should too!). I was lucky enough to see a live streamed concert online lately and I was amazed about how powerful they are. These guys are very passionate about what they’re doing and I was totally blown away by Brittany Howard’s voice, the frontlady of the band. They’re playing a very timeless and at the same time modern kind of blues, they can literally blow away the audience with every note and you could totally feel the fans’ love coming out from every corner of the Auditorium. They’re a band to watch and keep in mind, because they’re going to achieve great things.

It’s not the first time for me talking about Paolo Nutini here, and I’m certainly not going to get tired about it. Ever. As I was able to tell many times already, he is on a list of a couple of artists that helped  me through some darker and bitterer times years ago. The lyrics, no matter from which album they are, lift me up everytime I hear them and they really give me those soulbalm moments. His Strawberry Songs Tour brought him back to Montreux, which was great for me to attend, since I’m living here in Switzerland. After his “Caustic Love” album release last year I got the chance to see him live in a bunch of venues, and I have to admit, I’m still a fan of the small ones. The supertiny Backstage in Munich and, a couple of days ago, the Stravinski, were my favourites so far. I won’t ever get tired to talk about his music, how timeless it is, how amazingly powerful his voice can be and what an incredibly various audience he attracts. Of course, there were still some fans hanging on his very first album “These Streets”, and I could hear their disappointment on the new rearranged song “New Shoes”, for example, made to fit into his new, maybe a bit more grown up setlist. I loved the concert’s visuals and how Paolo and The Vipers stick together perfectly: “Caustic Love” is certainly a masterpiece made to last into everybody’s music collection and will still be great to listen at in 20 years from now – it’s a classic. If you’d like to hear Paolo Nutini live you should check the dates here.

The Montreux Jazz Festival is made for an audience of every age: you can be a music fanatic, a discoverer or simply a stroller on the lake side, you will be able to find some tunes that fit your taste. Doesn’t really matter if it’s outside in the Park, the Auditorium or later at night for some DJs and dancing at The Studio: you will be warped into the great atmosphere of this great place. I would reccommend you to be there around daytime already, enjoy a swim into the lake’s beautiful water, have a relaxed walk through the market and food stands before you enjoy the show you’ve picked.

The Montreux Jazz Festival is still running until July 18th, 2015. You can find all the infos and line up here.

Merci beaucoup Montreux Jazz Festival for having me ❤