The Amsterdam Dance Event is more than just connecting all the lovers of electronic music from different countries or a huge networking platform for professionals: despite the musical events, it also offers to the public an insight into art and movies connected with the scene.

I love streetart. It’s a huge form of expression and it’s usually part of my photographed motives while I’m out travelling. Even if I’ve been to Amsterdam tons of times, I didn’t really noticed graffitis around the city: the only place that is been coloured up a bit was the northern part, which I discovered this spring.

That’s the reason why the exhibition at the Amsterdam Museum “Graffiti: New York meets the Dam” was a pleasant experience. I learned that pretty much while streetart was rising in the American city, it became present in Amsterdam as well, partly with the punk movement. I would reccommend a visit to anybody, it has been made amazingly, combining pictures, original pieces taken in the city and catapulting the visitors in the artist’s world, like empty parking lots or underground subway stations.

The exhibition will be displayed until January 2016 – Tickets: 12 EUR 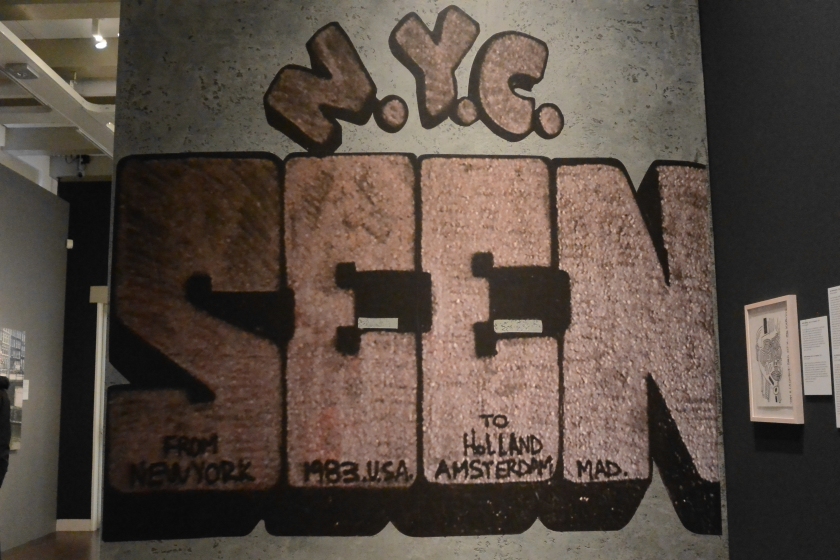 Speaking of underground: one of my last parties during the ADE was in a club called Closure. I decided to head there especially for Magda’s Set, which usually never disappoints. Another reason though, was the club itself: I read a lot of things about it online, top topic was a selective door and a rude staff. This things tend to intrigue myself so I was very curious to see if all the reviews were true.

False! I passed some very friendly people at the door and the club staff inside was even more kind and welcoming. Because of the above mentioned reasons, the club is seen as a second Berghain. A little small, compared to the legendary German club, but absolutely underground. The walls are painted in a pure black with some white graffitis here and there, red LEDs light up the entrance and the bar a bit, and darkness turns to light sometimes, depending on the bass playing. You’ll obviously understand that taking pictures in a place like this was nearly impossible, but I tried.

Closure isn’t a place for heels and high class babes: come as you are. Which is great and it should be like this in more places. All that counts is the music played – gorgeous! It was mostly a fine combination between techno and deep house, with even the bartenders and runners dancing to the beat an absolute delight. Be aware that the headliners play on a late hour, when you have the club nicely packed, and it will get only darker, the air stickier because of the cigarettes and joints, but nobody seemed to care. If you leave the club for some fresh breeze you won’t be able to get in: they give no stamps. It couldn’t have been a better closure, indeed, to my own Amsterdam Dance Event.

A big thank you to the Amsterdam Dance Event for having me, I can’t wait to join this amazing event next year! ❤