Sometimes everything gets tight. Situations, people, life events- the list could be endless. And when things turn out this way, people tend to cope with it differently. You know, going out getting smashed, locking up at home, writing a diary, taking a selfie with an inspirational quote they just googled and never heard about before, the usual stuff. I booked myself a solo trip to Portugal.

After finding myself passive about many things in daily life, I wanted to figure out if I still could shake me up a little by going somewhere I did know almost nothing about. Being alone in a complete new place, usually wakes up my brain cells in order to get along with the new country I’m in and forces me to interact with people, that was exactly what I was looking for.

Being authentic can be a powerful thing, but it makes you see stuff in a different light. I realised that while communicating my not so brightful year to people close to me. I saw very quickly how those around me where slightly uncomfortable to look beyond the nowadays happy go lucky culture, by having a person in front of them that was far away from fine and could not fake it anymore. You are supposed to do that in your own four walls, where nobody can see it, but outside, you are only allowed to show the best version of yourself, because nobody can handle you. Since when did humanity turn into perfection? You’re kidding, right? So after a series of events, that were unhealthy but quite eye opening, I started to draw a fine line and regroup the people around me. I’m still learning but I’m happy to have started to do so. Because vulnerability leads to discussions, discussions lead to judgementalism, and often judgementalism leads to goodbyes, closures and prioritization of certain beings over others for my own sake- which always lead me to overthink until I drop or worse, faulting myself for just being who I am. That’s why I had to get the fuck out of here and start resetting from a neutral territory.

Since my budget could not stand a flight over the big pond, I tried to roam this curse and saviour, the so called internet, in search of response for a destination here in Europe. My choice was between Greece and Portugal in the end, the price range was basically the same. After seeing pictures from Lisbon, the flight was booked. A while later I was looking for a little escape from the city, it should have been a smaller place, right on the coast. And then I found this beauty called Ericeira. I think I stumbled over a random shot of this wonderful town through Instagram, during one of my sleepless nights at 3 am. I loved it! I had to go there and spend five days overlooking the Atlantic Ocean sitting on a fisherman’s beach. Totally my thing!

I chose Ericeira because I wanted to go to a place that was easy to explore by walk, that offered various types of food, peaceful enough but not completely off grid and with a various range of activities, in and outside of the water. Belonging to the magic seven of the World Surf Reserve, you would think that I was there to ride the waves. Still ain’t got the balls for that, sorry. I knew that I had SUP and Yoga as an alternative, which was good for me, since I wanted to have other different options of to dos while being there by myself. Well, I wasn’t expecting to meet that many amazing people who kept me company during my trip between Lisbon and Ericeira, and I surely was not prepared for the whole town being festive after 17 (!) years of waiting. 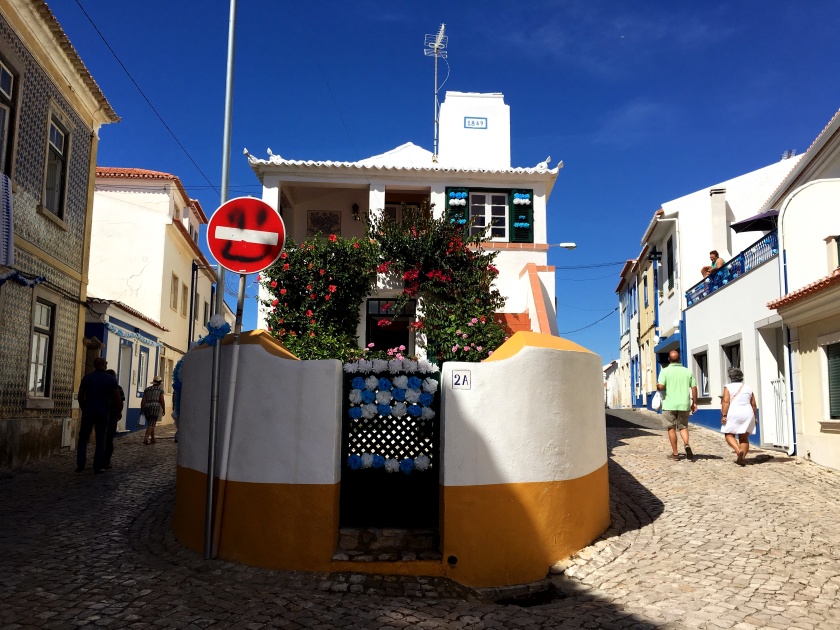 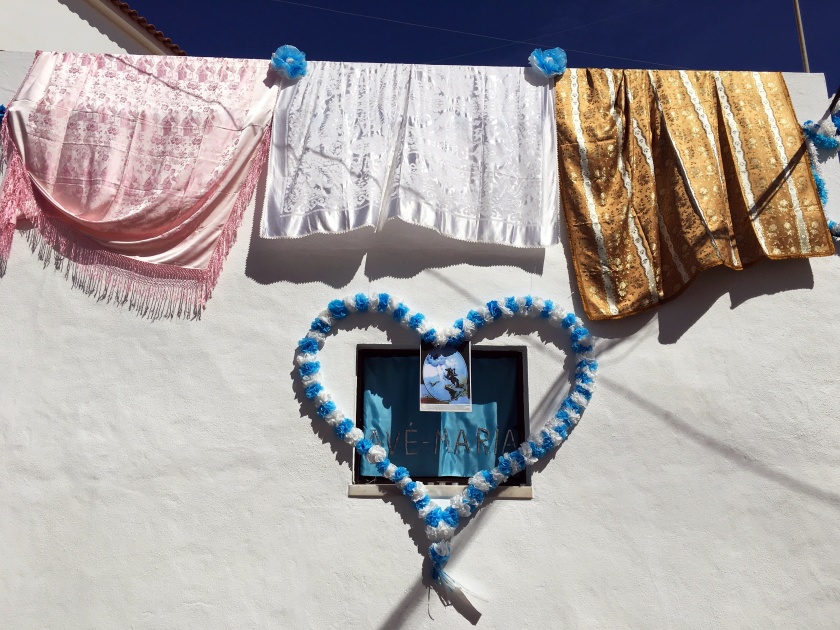 I started noticing the white and blue flowery decorations while still on the bus, and the first thought was of somebody very known around there was getting married. After checking in into the apartment I was staying at, my lovely host Isabel explained to me that the town was getting prepared for a week long celebration, in honor of the Holy Mary, who’s statue wanders around yearly between the other 16 villages along the coast. Right timing baby! Seeing all the street light settings, the food stands and the locals dressing pretty to go out every evening reminded me a lot of my time in my small south italian village – it’s a huge deal and it should be properly celebrated. 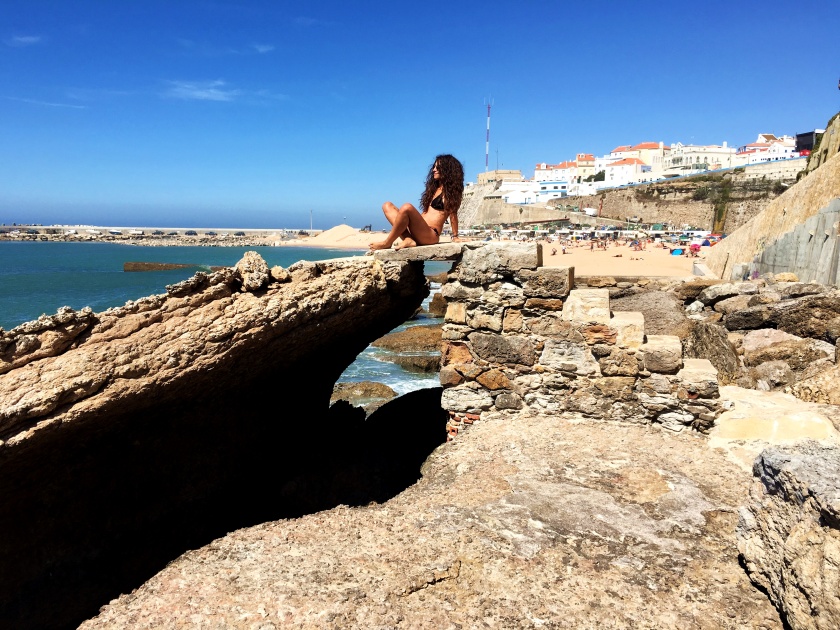 I was living literally two minutes away from the beach, which allowed me to get my daily dosis of saltiness while watching the fishermen cleaning their boats from the early morning work. I enjoyed staring at the sunset until the temperatures dropped down 10 degrees further at the only beach bar on Praia dos Pescadores. I had the best coffees and avocado toasts in the morning by myself, with the best co-travellers I met or with the locals sitting at my table. I wanted to do SUP on the Atlantic Ocean but the wind was screwing it up big time, so my booking was replaced to the local river – and I screwed up my instructor’s statistics as well by falling down, which never happened before this summer. (Apologies, Michel!) 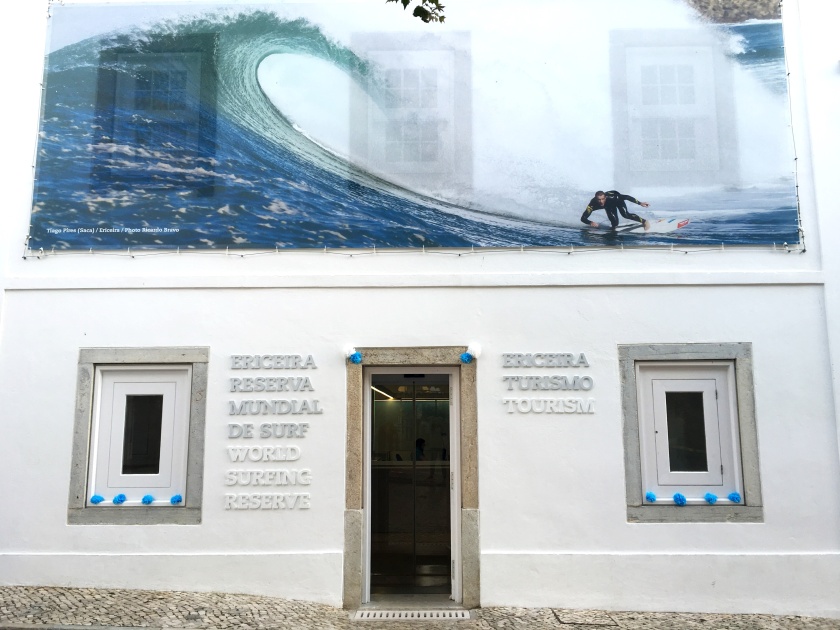 Life seems to pass by more on a slowly note here. People seem to take time for each other, stopping on the street for a quick chat or meeting up at 6 pm to watch sunset on a bench. Walking around at night, still noticing the gorgeous blue and white through the street lights was probably one of my favourite routines, the empty streets were all mine. 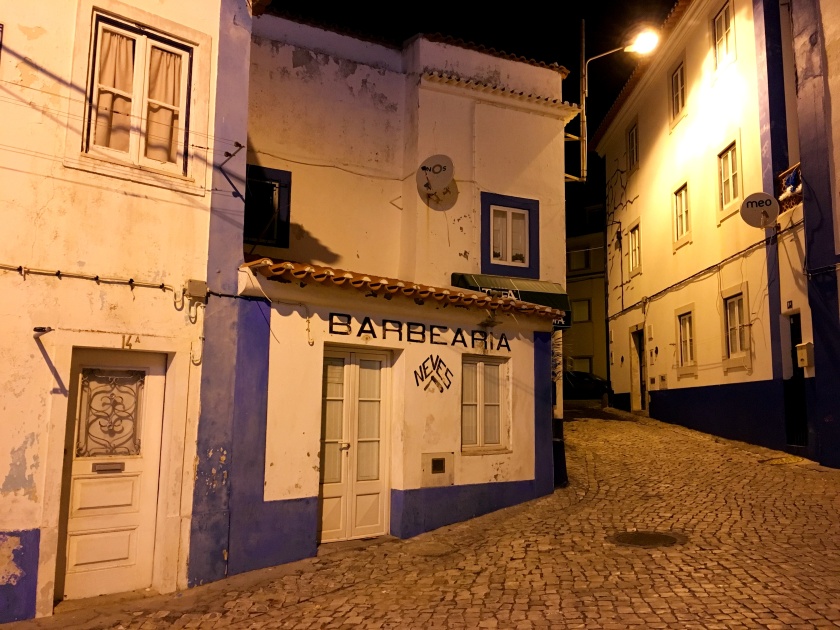 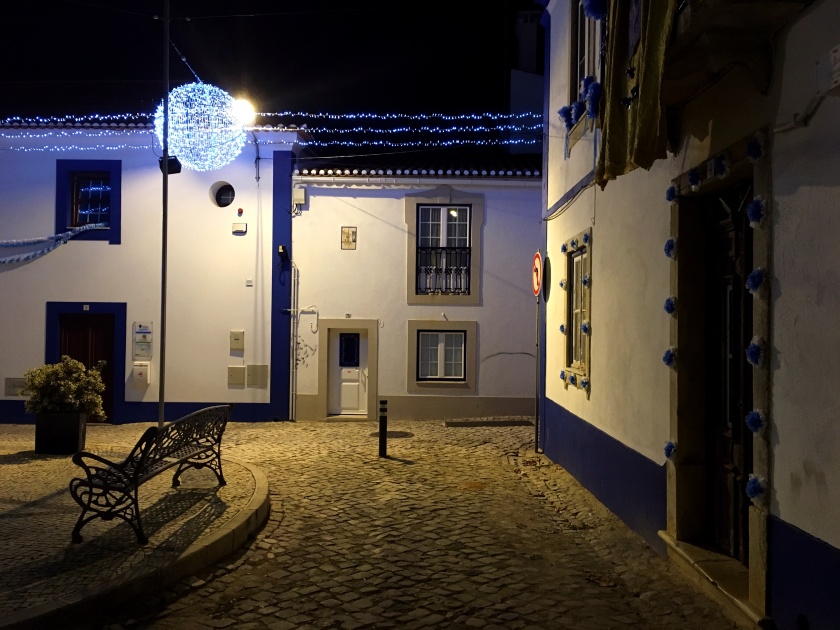 Ericeira got the shit out of me like many other places did before, preparing me to go back with a different mindset and loaded with the best memories I could ever have. This post is more personal than the most I did this year (and I admit I still have my issues by sharing this side of me) and a huge declaration of love for this town. But it’s a thank you as well to the gorgeous people I met along the way and hope to be reunited with soon.

When to get there: Ericeira rises like a cake in the oven during August. The usually population of 12000 goes up to 42000 during the busiest month of summer. I chose to be there in mid September, when it wasn’t extremely overcrouded. Don’t worry, you won’t be alone then, and the days are still mild. Just be prepared for some chillier air during the evenings.

How to get there: Take a bus from Campo Grande in Lisbon, the journey usually takes you 1.5 h and costs 6 Euros. The company called Mafrense operates until approximately 10pm. More infos here.

Where to stay: There is a great range of accomodations in Ericeira. From Hotel to Hostel you have plenty to choose. I had an Airbnb room in central Ericeira and shared the apartment with two other people. My host was one of the most lovely persons I ever had on my Airbnb journey and her dog was just amazing to play with when back home in the evening. More infos about my room here (New on Airbnb? Get 20$ off your first booking! Click here to use my code) 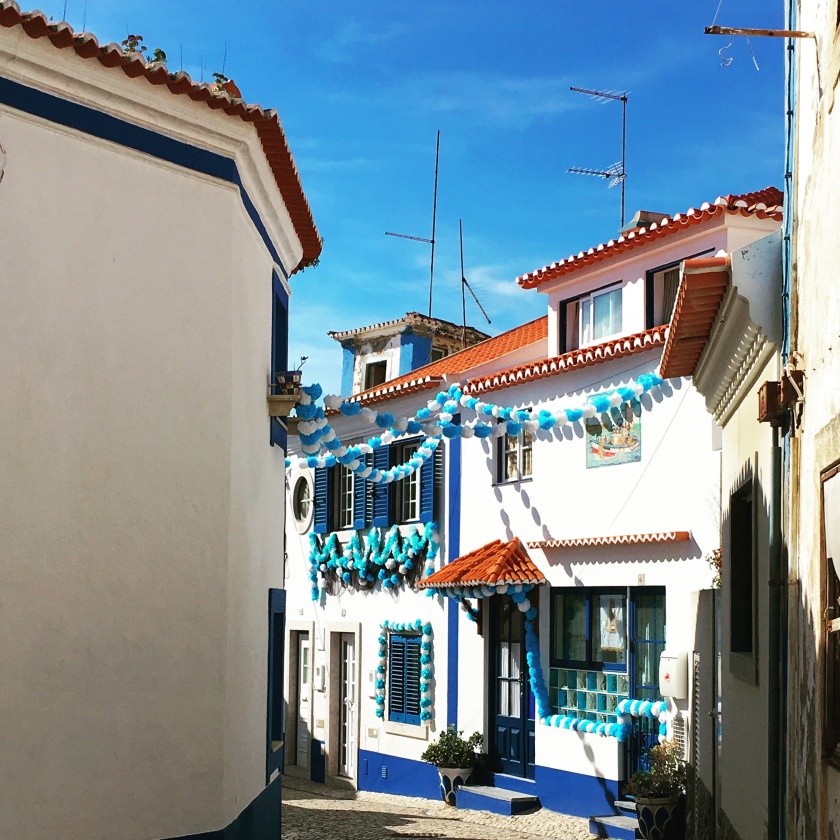 What to do: Surfing is obviously big here and you surely are more fearless than I am. Surf Schools are on every corner and they offer tons of packages in combination with an accomodation. Yoga is everywhere as well and should be tried indoors and outdoors (Boardriders for Outdoor Ashtanga). If you’re a SUP babe like I am, Ericeira SUP is your address and you won’t be disappointed, just simply don’t ruin any statistics please.

Where to eat: Puuuh! Too much choice, but here’s my top 4! Breakfast and delicious Coffee at KFÉ, healthy lunches or dinners at Brunch Me. Sushi (I had this almost every evening, I feel lightly ashamed) at Uni Sushi and a must is a fresh seafood lunch with a stunning view over the ocean at Marisqueria César. 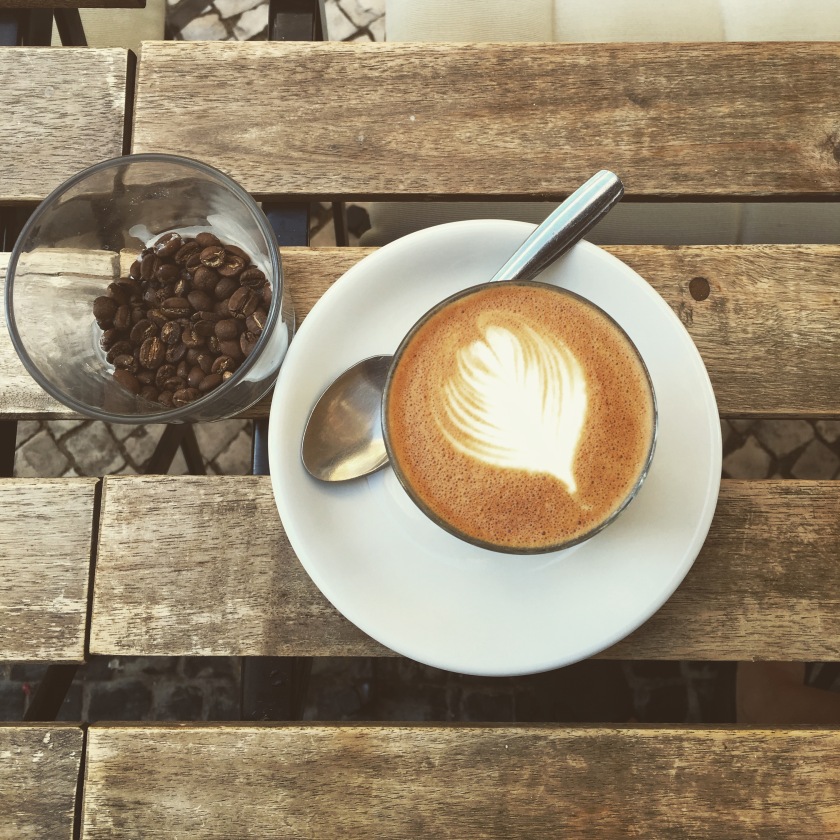 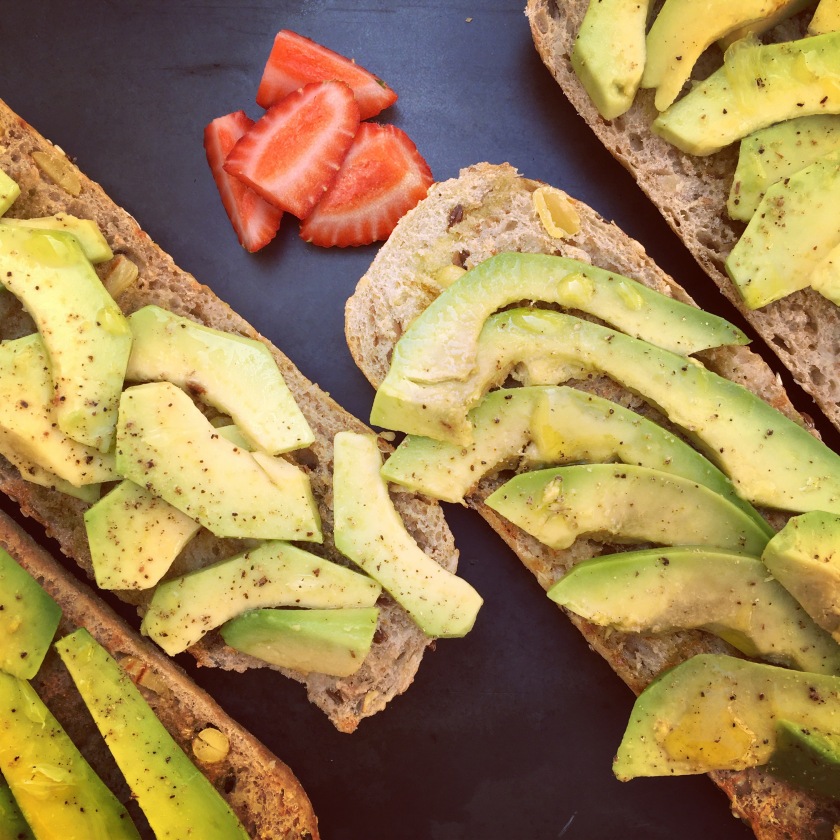 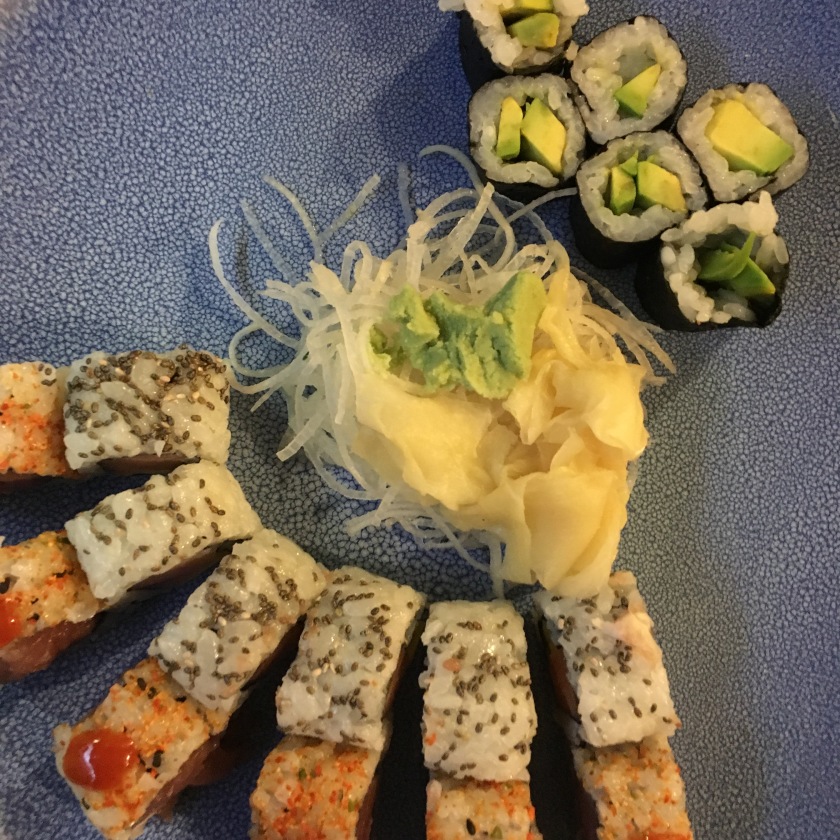 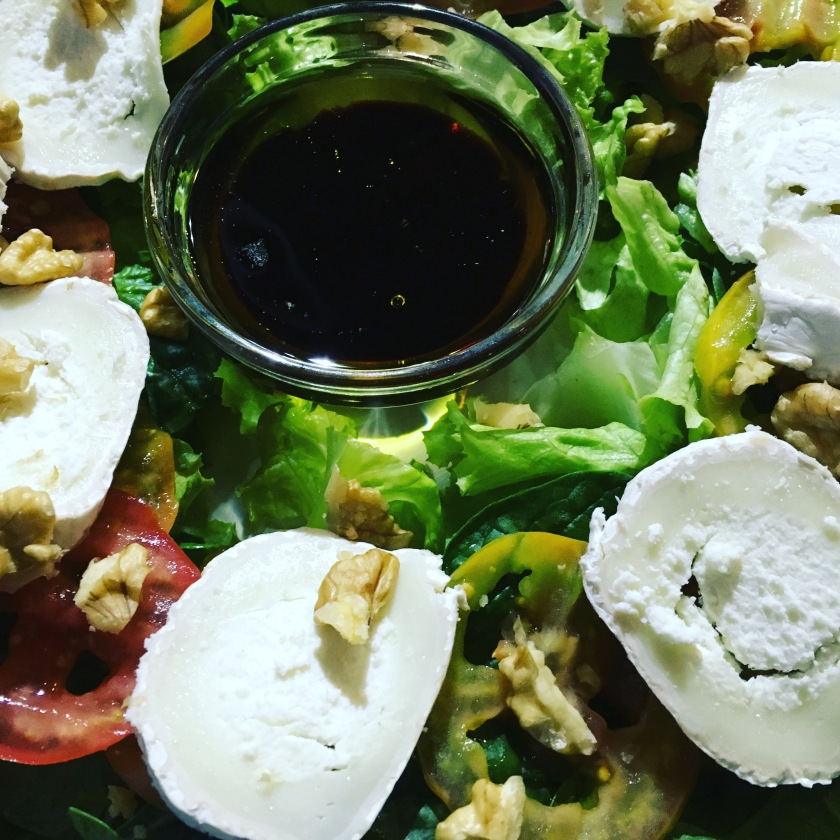 Beaches: There are many beaches around Ericeira. The most suitable for swimmers however, is Praia Dos Pescadores, just in the town’s center.

2 thoughts on “Ericeira: Rearrangements and Exploring”